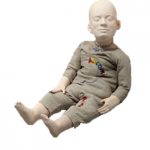 Between 2000-2006, carrying a child size doll made of stuffed unbleached canvas and a head of cast glazed porcelain, Bredahl travelled to Lebanon, Egypt, Jordan, UAE and Syria. People living in areas with a tradition for embroidery were invited to work directly on the doll. An Egyptian woman applied three red buttons, three drops of blood, hinting at the violence she has seen in her country, but also symbolizing the great pyramids. A Syrian man portrayed his wife on their wedding night, showing her henna tattoos. Others embroidered messages of love and hope. In this way, the doll came to embody different local stories and outlooks on life, while at the same time becoming a metaphor for the experience of the traveller herself. Often motives and details would be aesthetically linked, as if people wished to continue what others had initiated. A photo-documentation of people at work on the doll in their own homes is included as part of the project. Similar journeys were later carried out with new dolls in Brazil in 2008, and in Mexico and New York in 2009 and 2010.